Bathing is the washing of the body with a fluid, usually water or an aqueous solution, or the immersion of the body in water. It may be practised for personal hygiene, religious ritual or therapeutic purposes.

There are stories of how people didn’t bathe in the Middle Ages – for example, St. Fintan of Clonenagh was said to take a bath only once a year, just before Easter, for twenty-four years. Meanwhile, the Anglo-Saxons believed that the Vikings were overly concerned with cleanliness since they took a bath once a week.  On the other hand, we can also see many literary references and works of art depicting people taking baths, and noting that it was part of daily activity.

Personal hygiene did exist in the Middle Ages – people were well aware that cleaning their face and hands was a good idea – health manuals from the period note that it was important to get rid of dirt and grime. They also explained that it was important to keep the entire body clean. For example, the fourteenth-century writer Magninius Mediolanesis stated in his work Regimen sanitatis that “The bath cleans the external body parts of dirt left behind from exercise on the outside of the body.”

Medieval writers saw bathing as a serious and careful activity. One medical treatise, the Secreta Secretorum, has an enitre section on baths. It notes that the spring and winter are good times for bathing, but it should be avoided as much as possible in the summer. It also warns that excessively long baths lead to fatness and feebleness. Meanwhile, Magninius Mediolanesis offers over 57 bathing prescriptions to use in specific conditions, like old age, pregnancy and travelling and his rules for bathing run 1500 words long.

Some famous bathing sites had their own rules. In 1336, Pietro de Tussignano formulated twelve rules for those coming to the Italian town at Burmi, which lies near Switzerland, to get the healing effects of its bath. They include that the person should beforehand not to have too much sexual intercourse nor have abstained from it, and that he should also enter the bath with an empty stomach (if they had to have food it could only two spoons of raisins with a little wine). You could only pour the water over your head if you were clean-shaven, otherwise your hairs might impede the effects of the water. The person should take the baths for fifteen days, spending up to an hour a day getting washed, but if all goes well, the bather will benefit for over six months with improved health.

Hot springs at Aachen, Germany, 1682
For most people, having a private bath was not an option – it was simply too costly and too time-consuming to have their own baths. That does not mean they went without bathing, for public baths were very common throughout Europe.

By the thirteenth-century one could find over 32 bathhouses in Paris; Alexander Neckham, who lived in that city a century earlier, says that he would be awakened in the mornings by people crying in the streets that ‘that baths are hot!”

In Southwark, the town on the opposite side of the Thames River from London, a person could choose from 18 hot baths. Even smaller towns would have bathhouses, often connected with the local bakery – the baths could make use of the heat coming from their ovens to help heat their water.

In her book Clean: A History of Personal Hygiene and Purity  Virginia Smith explains,”By the fifteenth-century, bath feasting in many town bathhouses seems to have been as common as going out to a restaurant was to become four centuries later. German bath etchings from the fifteenth century often feature the town bathhouse, with a long row of bathing couples eating a meal naked in bathtubs, often several to a tub, with other couples seen smiling in beds in the mid-distance.”

Before the 7th century, the Japanese probably mostly bathed in the many springs in the open, because there is no evidence of closed rooms. In the 6th to 8th centuries (in the Asuka and Nara periods) the Japanese took the religion of Buddhism from China, which had a strong impact on the entire culture of the country. For every Buddhist temple traditionally included a bathhouse (yuya) for the monks. These baths were opened in time to the rest of the population, because the principle of purity in Buddhism plays a major role. Only the wealthy had private baths.

The first public bathhouse was mentioned in 1266. In Tokyo, the first sento was established in 1591. The early steam baths or steam baths were called iwaburo (rock pools) or kamaburo (furnace baths). It was natural or artificial caves or stone vaults. In iwaburo along the coast, the rocks were heated by burning wood, then sea water was poured over the rocks producing steam. The entrance to these “Bath Houses” was very small, so that the steam escaped. There were no windows, so it was very dark inside and the user constantly coughed or cleared their throats in order to signal to new entrants which seats were already occupied. The darkness could be also used for sexual contact. Because there were no gender distinction, these baths came into disrepute. They were finally abolished in 1870 on hygienic and moral grounds. Author John Gallagher says bathing “was segregated in the 1870s as a concession to outraged Western tourists.”

At the beginning of the Edo period (1603–1867) there were two different types of baths. In Tokyo (then called Edo) hot-water baths (yuya) were common, while in Osaka, steam baths (mushiburo) were common. At that time shared bathrooms for men and women were the rule. These bathhouses were very popular, especially for men. “Bathing girls” (Yuna), were employed to scrub the guests’ backs and wash their hair, etc. Some guests apparently offered to pay but the yuna also provided favors. In 1841, the employment of Yuna was generally prohibited, as well as mixed bathing. The segregation of the sexes, however, was often ignored by operators of bathhouses, or areas for men and women were separated only by a symbolic line. The official removed to the prohibitions. Today, sento baths have separate rooms for men and women. 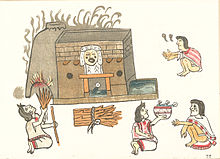 Spanish chronicles describe the bathing habits of the peoples of Mesoamerica during and after the conquest. Bernal Díaz del Castillo describes Moctezuma (the Mexica, or Aztec, king at the arrival of Cortés) in his Historia verdadera de la conquista de la Nueva España as being “…Very neat and cleanly, bathing every day each afternoon…”. Bathing was not restricted to the elite, but was practised by all people; the cronist Tomás López Medel wrote after a journey to Central America that “Bathing and the custom of washing oneself is so quotidian (common) amongst the Indians, both of cold and hot lands, as is eating, and this is done in fountains and rivers and other water to which they have access, without anything other than pure water…”

The Mesoamerican bath; known as temazcal in Spanish, from the Nahuatl word temazcalli, a compound of temaz (“steam”) and calli (“house”), consists of a room, often in the form of a small dome, with an exterior firebox known as texictle (teʃict͜ɬe) that heats a small portion of the room’s wall made of volcanic rocks; after this wall has been heated, water is poured on it to produce steam, an action known as tlasas, a person in charge then directs the steam, that accumulates on the upper portion of the room, to the bathers who are lying on the ground using a bough, with which he later gives them a massage, then the bathers scrub themselves with a small flat river stone and finally the person in charge introduces buckets with water with soap and grass used to rinse. This bath had also ritual importance, and was vinculated to the goddess Toci; it is also therapeutical, when medicinal herbs are used in the water for the tlasas. It is still used in Mexico. 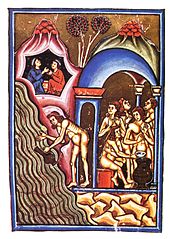 A sweat bath: illumination from Peter of Eboli, De Balneis Puteolanis (“The Baths of Pozzuoli”), written in the early 13th century

In the Middle Ages, bathing commonly took place in public bathhouses. Public baths were also havens for prostitution, which created opposition to the public baths. Rich people bathed at home, most likely in their bedroom, as ‘bath’ rooms were not common. Bathing was done in large, wooden tubs with a linen cloth laid in it to protect the bather from splinters. Additionally, during the Renaissance and Protestant Reformation, the quality and condition of the clothing (as opposed to the actual cleanliness of the body itself) were thought to reflect the soul of an individual. Clean clothing also reflected one’s social status; clothes made the man or woman.

Additionally, from the late Middle Ages through to the end of the 18th century, etiquette and medical manuals advised people to only wash the parts of the body that were visible to the public; for example, the ears, hands, feet, and face and neck. This did away with the public baths and left the cleaning of oneself to the privacy of one’s home.

The switch from woolen to linen clothing by the 16th century also accompanied the decline in bathing. Linen clothing is much easier to clean and maintain – and such clothing was becoming commonplace at the time in Western Europe. Clean linen shirts or blouses allowed people who had not bathed to appear clean and well groomed. The possession of a large quantity of clean linen clothing was a sign of social status. Thus, appearance became more important than personal hygiene. Medical opinion supported this claim. Physicians of the period believed that odors, or miasma, such as that which would be found in soiled linens, caused disease. A person could therefore change one’s shirt every few days, but avoid baths – which might let the ‘bad air’ into the body through the pores. Consequently, in an age in which there were very few personal bathtubs, laundry was an important and weekly chore which was commonly undertaken by laundresses of the time.

This site uses Akismet to reduce spam. Learn how your comment data is processed.